How you know them: She’s The Closer. He’s the baby-faced star of FOX’s The Following, along with dozens—hundreds? thousands?—of movies like Footloose, Apollo 13, and Mystic River.

How they met: Filming the play Lemon Sky for PBS in the late ‘80s. Sedgwick wasn’t too fond of Bacon at first (“He wasn’t very friendly, he had an attitude.”), and he knew it (“I was more into her than she was into me. I think she found me cocky and pretentious.”). He asked her out a few times. She eventually broke down, and they married months later.

How you know them: He’s played Marty McFly, Alex P. Keaton, and many more all-American wiseasses. She’s a film and TV actress whose most notable role was playing Fox’s girlfriend on Family Ties. They’re both heavily involved in funding research for Parkinson’s Disease, which Fox has been battling since 1991.

How they met: Well, it was on Family Ties—but nothing happened at first. The couple told Oprah:

POLLAN: It wasn’t that I wasn’t attracted to him—I was just dating someone else.

FOX: And it wasn’t that I wasn’t attracted to her—the guy she was dating was just bigger than me.

They officially began seeing each other in 1987, while filming Bright Lights, Big City. 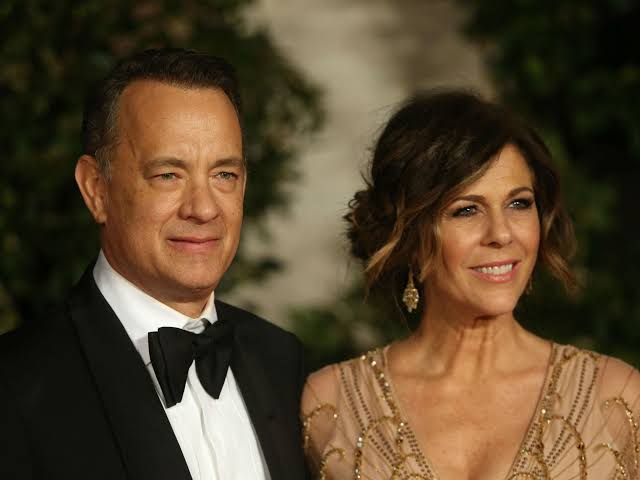 How you know them: He’s in every movie you’ve ever loved, plus Bosom Buddies. She’s a prolific actress herself, most recently appearing as the high-maintenance Evie on HBO’s Girls.

Three years later, Hanks starred with her in Volunteers, and sparks flew. In time, Hanks left his unhappy marriage, and Wilson broke up with her fiancée, claiming, “I didn’t know what being in love was until I met Tom.” The couple wed in 1988.

How you know them: Hall is a former Saturday Night Live cast member and current behind-the-scenes TV pro. And she’s … aw, come on. You know who she is. If not, this should help jog your memory.

How they met: In college! Both were heavily into the comedy scene at Northwestern University. In 1982, their troupe, the Practical Theater Company, attracted the attention of SNL’s then-producer, Dick Ebersol, who hired all four members right out of school. Julia’s been with Hall ever since. “Brad was the right guy, and he’s remained the right guy,” she says.

How you know them: He’s the star of NCIS, Chicago Hope, and St. Elsewhere. She played Mindy in Mork and Mindy, and the lead in My Sister Sam.

How they met: Famously private about their relationship, rumor has it the pair hooked up at a party in March of 1986, two months after Harmon was named People Magazine’s Sexiest Man Alive.

(From that interview: “When I marry, I want it to be everything this town says it can’t be. I’m not into catting around.”) They were engaged by summer’s end and wed the following March.